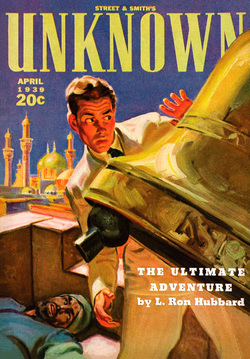 "The April issue was a knockout. "The Ultimate Adventure" is the best fantasy I have read in years. It surpasses everything Hubbard has done." 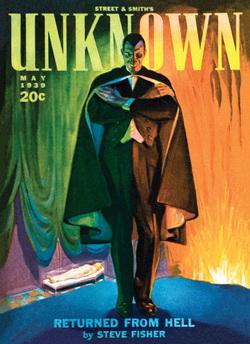 "Danger inThe Dark' was one of the best in it's line I have read, with very few points of incredibility to mar it." 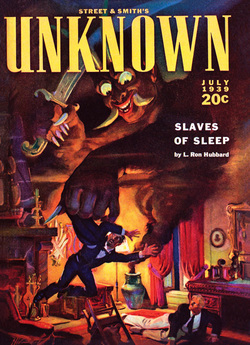 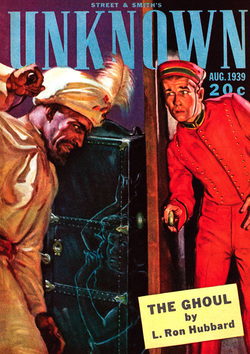 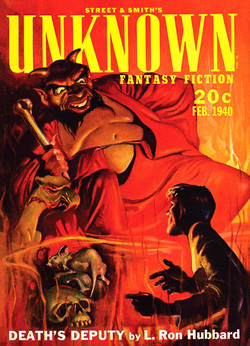 "I hope you added 'that extra hundred dallars' to Hubbard's check!" 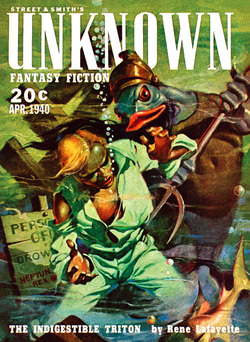 According to the manuscript, the original title for "The Indigestible Triton" was "Man Eats Monster". The title was changed again when the story was Published by Fantasy Publishing Company Inc.,1949 in book form as "Triton".

In the back of this issue there is a "Top Ten Best of 1939" pick by famous science fiction writer, Isaac Asimov. Here is what he said.

"I'm going to like this. I can imagine no more congenial job than picking the ten best stories Unknown printed in the year 1939. For one thing, it enables me to give due credit to two of my favorite authors: L. Sprague de Camp and L. Ron Hubbard."

"Without further introduction, I dash right into the list:"

"I nominate as the ten best stories in Unknown for the year 1939, the following:"

"Incidentally, the first six of those ten are five-star yarns, and i'll eat my hat - without ketchup - if any reader can show me ten consecutive issues of any other magazine in science or fantastic fiction (including Astounding) with six fivers. And four of those fivers were lead novels and a fifth was a serial. That's what I call providing entertainment in carload lots." 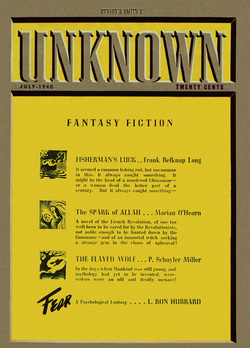 Following this issue, letters began to come in from readers regarding "Fear". Notably, the October, 1940 issue is packed with comments on "Fear". See below. 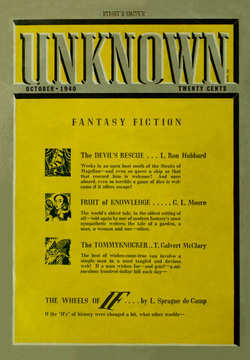 
In the readers section of this issue, there is letter after letter from the readers about "Fear". Some praised it. One reader states "You could almost get along with only Hubbard..."

There are others that clearly got a bit too scared i.e. "...I do mind very much the change from humorous fantasy to some form of fear psychology. After all this is an escape medium... I refer, of course to the novel "Fear' in the July issue..." This reader continued with "Fear" is doubtless an excellent thesis in story form, on the mental reactions of a deranged mind, and the picture of disassociation and hysteria is excellent. The author is doubtless well versed in the psychology of mental illness..." The reader closes his letter with "I'll have to start looking around for something more cheerful. I guess I just cant take it!"

Another reader wrote to to find out about how Ron writes. He asks, "Does Hubbard do any revising? Or does he whack it out as he goes along and send it in without looking at it again? His turnout is almost unbelievable... Hubbard's rapidity is amazing because he's just a darn good writer His writing is invariably up to a standard, and it's a high one."

Be sure to read the description of the December, 1940 issue below. There is a great anecdote from the editor, John W. Campbell, about Ron's similar experience to the one in "The Devil's Rescue". 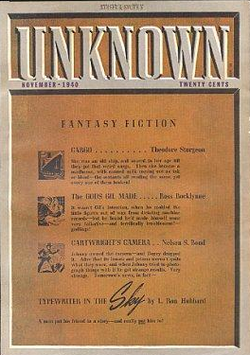 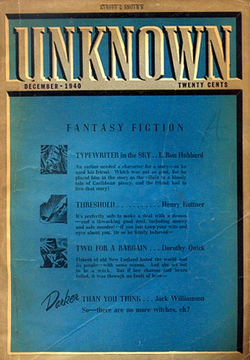 In the section "Of Things Beyond" of this issue, the editor John W. Campbell gives the readers an update on Ron's sailing trip to Alaska. It was more then just a sailing trip, it was a coastal charting expedition that Ron was doing in connection with The Explorers Club. Here is what Mr. Campbell had to say:

"Incidentally, L. Ron Hubbard, a usually regular contributor to these pages, has been absent from the scene for some time. He's been charting the coast of Alaska. One of his recent stories was "The Devil's Rescue," if you remember, a tale written some six months ago. Maybe the Devil didn't like his yarn. Anyway, latest information has it that, while not in far southern waters, Ron Hubbard's had a slight case of shipwreck himself - off the Alaskan coast. It happened about the time that story came out."

"The ship, it happens, was his ketch, 'Magician II.' Maybe that Magician had unfortunate dealings with the Devil?"
At present, Ron Hubbard's heading for home and more stories are expected; he made land successfully, but claims he had some difficulty distinguishing it from the sea. It was apparently, doing something fancy in the line of raining."

As a side note Ron had stayed in Ketchikan, Alaska on this trip and wrote "The Chee-Chalker" which was published in Five Novels Monthly, July - August 1947. See the Five Novels section in this website. 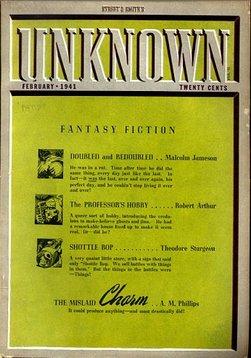 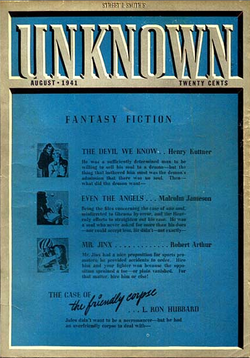 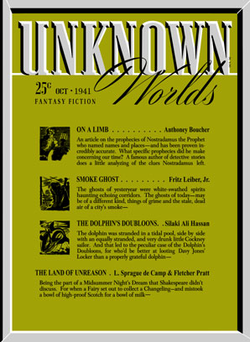 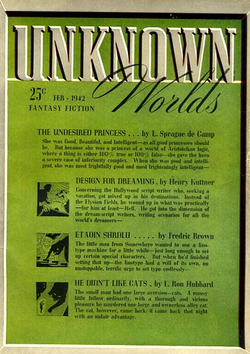 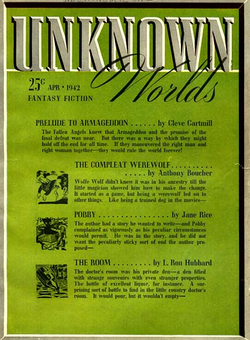