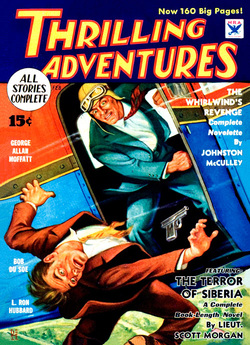 Despite the fact that this is the first published story by L Ron Hubbard in any pulp, there is a line below the title in the pulp stating "Author of 'Danger Ahead,' etc." I am not sure where this story is from or if it exists. 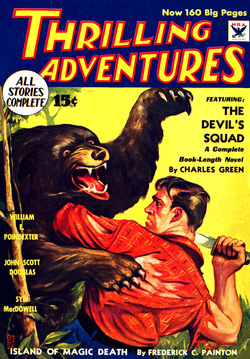 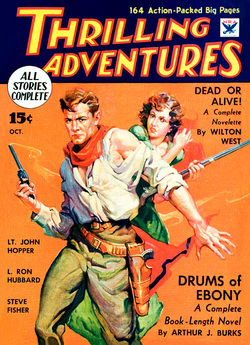 There is an Editor's note in the back of the issue worth referencing.

"I guess L. Ron Hubbard needs no introduction. From the letters you send in, his yarns are about the most popular we have published. Several of you have wondered, too, how he gets the splendid color which always characterizes his stories of the faraway places.
The answer is, he's been there, brothers. He's been, and seen, and done, and plenty of all three of them!"

Thrilling Adventures - January, 1935 "The Trail of the Red Diamonds" 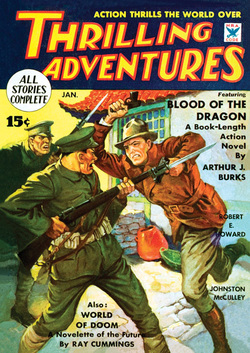 Thrilling Adventures - May, 1935 "The Squad that Never Came Back" 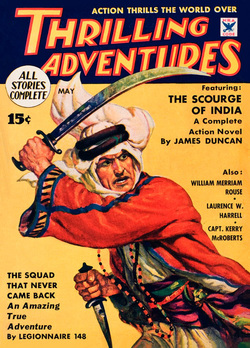 
In this issue an adventurer wrote in asking for some advice from Ron. Both the question and Ron's reply is brought to you here:

"I've listened with my mouth open to tales of China, told by many of my friends who have been there. One, a redheaded devil, made many trips up the Yangtse; another had a humdinger of an orchestra in Singapore; another made several trips up through Peiping to Manchuria; and yet another, a blond Russian, came here from Harbin."

"I've been planing to go back to Harbin with him some day, to visit his folks. We intend to make the trip across in a small ketch, when finances permit. If we ever see our way clear to make it, i'd like to corner you and get the low-down on some of those Chinese enigmas."

"Ever been in Mexico? The old itching foot is again bothering yours truly considerably, so I intend to the camp gear in either a motorcycle side-car or an Austin roadster and highball it down over that new highway from Laredo, Texas, to Mexico City next winter. Stay a few months, doing a bit of jungle trekking in Yucatan, and then maybe trade the outfit for a small boat and hit across to the West Indies or down to Central and South America."

"That itching foot is a bothersome thing, but I can't figure a man wanting to go places when he lives in the vicinity of Chico. That Feather River country is great stuff. I was flying there a few months ago - flew from the coast to Tahoe in nothing more airworthy then an Aeronca."

"But about Mexico: there's a peach of a road from Tijuana down to Mexico City. It isn't as far as you'd think, either. And the country isn't so settled. Nothing can beat a motorcycle in country like that. I'll bet you have a swell time of it!"

"About China: It's a great country, a dirty country, and an expensive country for a white man. The worst thing I can imagine is getting stuck along the Yellow Sea without a pocket full of jack. Believe me when I say that nobody is your pal in Yellow Peril Land when your broke."

"I've always wanted to cruise along that way in a small boat, but lately I've been obsessed with another idea. Why not take a tramp out to Shanghai, buy a sea-going junk and sail that thing back home? These junks are quite seaworthy, and they're like fish in the water in spite of their looks. Under the waterline they're built with real streamline design. All that overhang stern is just so much show. With a hold full of rice and dried fish you could pick your crew from dozens and dozens of applicants - and Chinese sailors know the score, I'll tell you."

"From Shanghai, I'd sail down into the waters of Australia and thereabouts, taking in the south Pacific."

"The idea may sound nutty, but all adventure comes from loco thoughts. A sane man isn't apt to stumble into excitement, because, consciously or unconsciously, he is plotting twenty-four hours a day how to save himself the trouble of being annoyed!"

"-L. Ron Hubbard"
Ron originally submitted "The Squad That Never Came Back" under the pen-name Kurt von Rachen. He later wrote under this name for his Kilkenny Cat Series in Astounding Science Fiction. He also used Kurt von Rachen for "Red Sand" in the February, 1936 issue of Top Notch. Ron later told a story that he had his agent, Ed Bodin, submit this story to Leo Margulies, the editor of Thrilling Adventures, as a new writer. Here is Ron's story:

"Day or two later, Ed called me in a panic. 'They love it. But they want to know what this guy looks like.'

"So I said, 'He's a huge brute of a man. Tough. Black hair, beard. His idea of a party is to rent the floor of a hotel, get everybody drunk and smash the place to bits. A tough character."

"So Ed hung up and all seemed well."

"Then the next day he called again in even more of a panic. 'They want to know where he is! They want to see him! And sign a contract!"

"So I said 'He's in the Argentine. He's wanted for murder in Georgia!"

"So Ed hung up. All went through smoothly."

"Now it's not illegal to use a pen name. But to play such a joke on an old friend like Leo was bad."

"So I went over to Leo's office to tell him for laughs."

"Unfortunately, Leo met me with a manuscript in his hand."

"He said, 'You old-time pros think you are all there is! Look at this. A story, brand-new, fresh. New writer. Got it all over you.'

"And the manuscript he was holding was 'The Squad That Never Came Back by 'Kurt von Rachen.'

"I used the name amongst others for some years. But that isn't all there is to the story."

"After the war years, I was riding down in an elevator in Leo's building. A brand-new fresh writer had stepped in with me."

"I was glad for him. Most pros are for the new ones that are trying."

"'Yeah,' he said, 'and this sure is a wild town,' meaning New York. 'Last night I was at a party. Guy rented a whole floor of a hotel, got everybody drunk, smashed the place up...'"

"I started, blinked. Could it be?"

"What was his name?' I inquired breathlessly."

"'Kurt von Rachen,' he said. And left me standing there forgetting to get out." 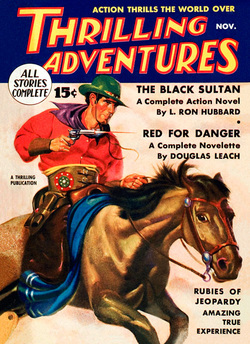 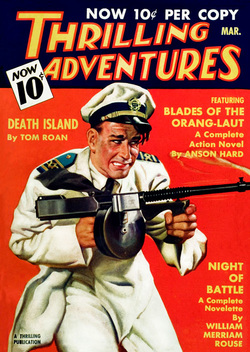 Ron goes over how it was that he came up with this story in the article "Magic out of a Hat" in the January 1936 issue of Writers Digest. 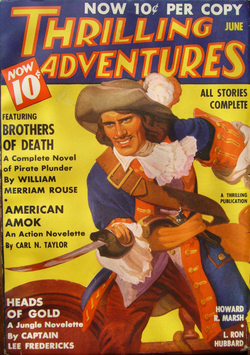 There is a great anecdote to this story in the editors section called The Globe Trotter:

"A History All Its Own."

"L Ron Hubbard's Escape For Three is a good tale. But like most good stories, it has a story all its own, a backstage happening, that's almost as interesting."

"Escape For Three is based on an incident which occurred when I was in the Marines. A Youngster who happened to be very hard-boiled and talked out of the side of his mouth was the worst rebel I had in my outfit."

"He talked continually about deserting and other dark deeds and he actually tried it."

"He went into a nearby town and happened to run into a barroom brawl in which four other Marines where pitting their strength and fists against the pride of the army. However the fight started, it soon became very serious and our hard-boiled friend's introduction to it was the rather novel sight of a solder hurtling torpedo-wise through space into the street."

"The kid heard that time-honored yell, 'Hey, Marine! This way Marines!' It wasn't directed at him particularly but he took it up."

"He waded into the bar and found about fifteen solders fighting four marines. "

"Picking up a chair, the kid led a one man rear attack and did so well that he panicked the army lads who thought he was at least a battalion."

"The fight didn't last long after that and the next thing I saw of the kid (and i'd never expected to see him again) he was coming up the company street, dead drunk with his four warriors, all of them singing at the top of their lungs."

"Never saw a better soldier then the kid after that."

"And so, in fiction form, changed and altered by the dictates of writing, we have Escape For Three." 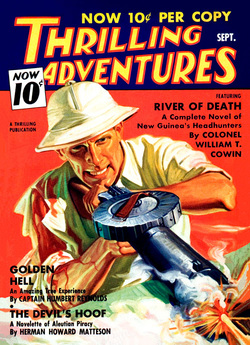 At the end of "Golden Hell" is the announcement of Hubbard next story "Tomb of the Ten Thousand Dead" under the pen name Captain Charles Gordon. 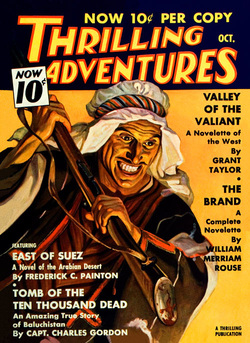 
From the editor's section The Globe Trotter:

"When you pick up this number of Thrilling Adventures and glance at the cover, your imagination was probably excited by the title Tomb of the Ten Thousand Dead. And then maybe you sobered a little, thinking that such a place doesn't exist anywhere - not even in Baluchistan; so you read the story - a true experience in the adventurous life of Captain Charles Gordan - and you did not remain long among the doubters. It's a yarn that takes you right out of the chimney corner and lifts you clear away into the strange paths where the Captain's steps have trod."

The editor continues with this:

"Somewhere on some distant plains a lone wanderer treks where few men have gone. It is Captain Charles Gordon, true world adventurer, and may he have the luck he prays for. He dropped us this note and then disappeared, nobody quite knows where.

"The Tomb of the Ten Thousand Dead' is the true story of the fate of the Lancaster - Mallard Expedition. I have no fears about the consequences of publishing it, as I have already disclosed the facts to the British."

"Since writing this I have had an offer to outfit another ship in an attempt to locate the Tomb of the Ten Thousand Dead. I may have luck this time. But then there are mounds in plenty throughout the Makran deserts, also called the Gadrosian Desert."

"I do not invite any correspondence on the subject as I hope to be in Persia by the time this is published. Other than the proofs I have shown you, I have nothing else to offer. I have argued it too long with the educational geniuses of the country."

"Here's the story. I hope you readers will like it."