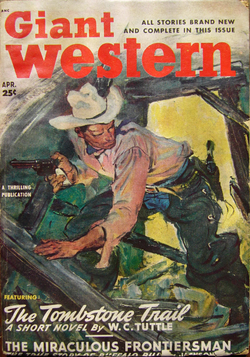 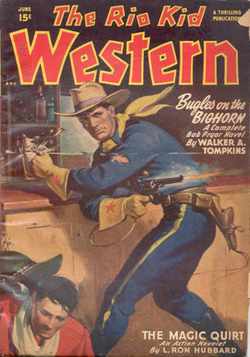 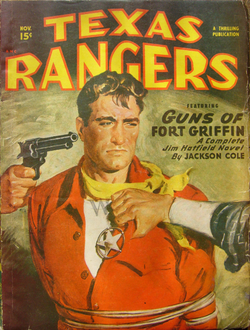 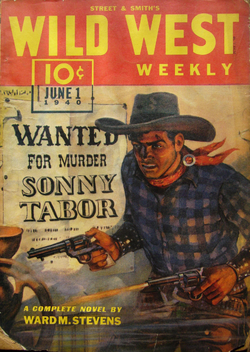 In the editors section - A Chat With The Range Boss - there is an interview with Ron.

"Here's the low-down on L. Ron Hubbard, whose 'Shadows From Boothill' appears in this issue. His literary and other achievements make him blush modestly not only to the roots of his hair but clear out to the end of it."

"Two towns argue about my birth. Tilden, Nebr., says I was born in Lincoln, Nebr. - and Lincoln says I was born in Tilden. I left those parts at the age of three weeks because grandpappy sold out in Nebraska (it was getting too tame) and got himself a spread in Oklahoma. Then it got too tame there and when I was two, I was hauled hauled off to Kalispell, Montana. Because my folks disapproved of the way I walked they glued me to McClellan saddle and there I stuck unto the age of seven."

"My dad, however, being an officer in the Navy, didn't like the idea of a bowlegged sailor. So he took me to sea; they say i'd traveled a quarter of a million miles at the age of nineteen."

"Got tired of life when very young and took up flying. An old article about me in The Pilot says: '... The undertakers used to come down to the field and titter.' Barnstormed the West and then left wings in favor of sails."

"The spring's issue of the Explorer's Journal says: "Mr. Hubbard is essentially a writer, but as a trained engineer has done important field work. In 1932-33 he conducted a West Indies Minerals Survey, making a complete mineralogical survey of Porto Rico. He also directed a motion picture expedition to the West Indies for submarine movies - at the same time obtaining important data for the Government Hydrographic Office. More recently he has been interested in adding to the knowledge of unfrequented passages and islands of the northwest coast, U.S.A."

"Somehow I got started in the writing business. Leaned on my experiences in the West, Asia the Caribbean, as a pilot, sailor and - calf-roper ! By some fluke, when I started I fanned out a story a day for six weeks and have since sold all but two. This, of course, spoiled me. Since then I haven't done a tap of work - I just write which, as everybody knows (har-har!) isn't really work. Four million of my words have been published in fifty-five different magazines. Various moom pitchers have been filmed from my fiction, too. Just now I'm larruping fantasy fiction more than anything else, though I've been writing Westerns for some time too."

"Hope your readers like 'Shadows From Boothill.' Truth is that the old West was superstitious in the extreme and injun lore reeks with more fantasy then the Arabian Nights."

"Tell the readers to yelp loud and long if they like my Western fantasy - and to keep kinda quiet ifn they don't." 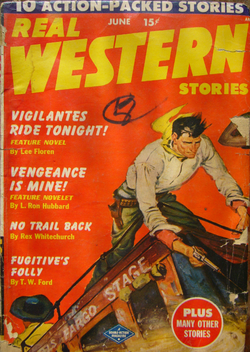